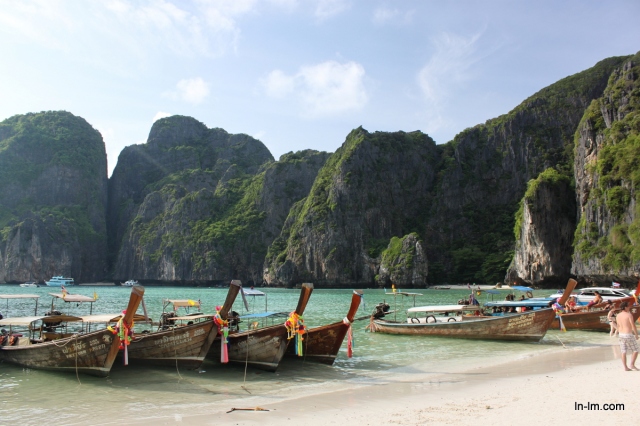 When the final exam paper came to a close on that glorious date the 28th of May I swiftly exited the exam hall, hit the button to the 21st floor and arrived back in the comfort of my 10 month orange walled apartment. I then began to fill my rather modestly small bag which would accompany me through the next 3295 miles or so of my final chapter of adventures in south-east Asia. The following two weeks would be the well deserved light at the end of the tunnel that everyone who studies at NUS should be entitled to. (Apart from those on pass/fail they deserve to sit some real exams)

Although excited I was slightly dubious about what my time in Thailand would be like. The comments me and Kate (my travel partner) had heard about the land formerly known as Siam formed a very mixed bag of speculations in our minds. Remarks stretched from ‘It’s the most beautiful coast you’ll ever see” to “It’s really cheap and tacky”. Expectations aside we arrived fresh and excited into Phuket International Airport. Phuket and Koh Phi Phi are often seen as the heart of the Thai tourism love story which went wrong. Phuket’s streets are messy and distasteful, cluttered with badly built bars and shops catering for a surprisingly older crowd. Lines of middle aged men desperately selling tickets to Thai Ping Pong shows prove quite the task to be overcome whilst making your way down the infamous Soi Bangla road.

After escaping from the bombardment of people begging us to use their taxis, we were quietly approached by a duo of thai men offering us a ride. Before leaving we approached the tourist reception in hope for an estimate of a fair price for a taxi, the Thai women were not too keen to help and seemed to give us the first number that came to their head. We reluctantly agreed to take the duo’s taxi and were guided towards a shady car in an unlit parking lot. With no clue he gave us a price we got it down to half and after a few stops for food (for our driver) along the road we arrived at our hostel Sea Blue Guest House. The guy on reception was very friendly and helped us sort out transport for the next couple of days as well as kindly informing us that we had been ripped off. The room we had was clean and comfortable. Phuket gives off the vibe at one point it was a truly exciting town with a vivid night-life. Disappointingly it now carries a European package holiday vibe due to the many fast food chain restaurants that are scattered across the town. We were most surprised by the fact the main clientèle seemed to be an older crowd. We had a few beers at this one bar and a wandered around. There are still some decent street food stalls to be found for reasonable prices but quite simply we weren’t big on the feel of the place.

Boarding the boat to the Phi Phi Islands the next day, the limestone rocks which come into view near the end of the journey are truly captivating as you slowly approach them. I feel the limestone formations appear so majestic to us are because they less commonly appear in this form around Europe. Koh Phi Phi Don is the largest island of the Phi Phi’s and also houses the central ‘town’. The settlement has evolved over years into this intriguing, busy and complex backpackers maze. It is noticeable travellers have been coming here for a long period of time yet there is a definite remarkable difference between the tourists that come to Phi Phi and Phuket. Due to heavy rainfall during the first night, many of the streets flooded and this made for entertaining scenes of both tourists and locals overcoming obstacles throughout the following day. Despite that the area is slightly dated and a little uncared for, there’s a great deal of charm not only about the area but about the locals that live and work there. Many of whom have left their villages in search for a more prosperous life.

The town was actually badly damaged by a Tsunami that struck in 2004 but there has been rapid reconstruction work on the town and on the more badly damaged coasts. We managed to get a very decent price for a boat trip around Phi Phi Let and although bearing some resemblance to Ha Long Bay the smaller islands have a completely different atmosphere surrounding them. As we were there in low season it didn’t feel as touristy as we had prepared ourselves for. It was quiet and there was plenty of space to roam around Maya Bay without much disturbance. I think it’s wrong to look at the Phi Phi’s in the same way as Phuket, ruined by mass tourism, the islands have changed from the untouched heaven they once were, yet in it’s place there’s an incredibly exciting, fun and vibrant forum to meet other travellers and let your hair down. Paradise doesn’t have the same definition in every person’s book. 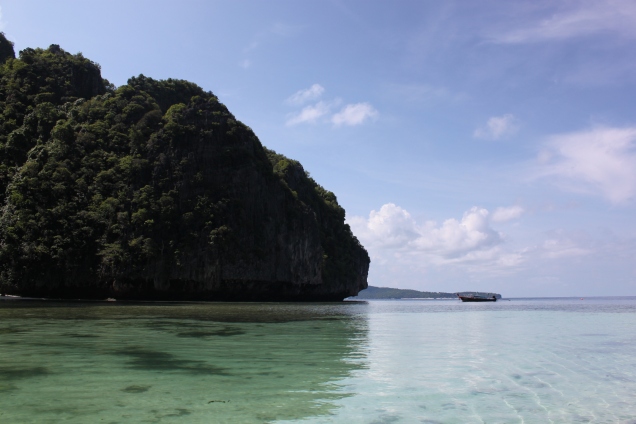